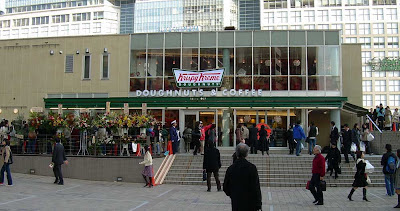 I normally don't do posts like this but my husband happened to be nearby at the time of the opening and I sent the camera with him. Please click on any picture to open up a much larger shot. He got these shots of the first day. They were taken around 12:30 pm. As you can see, the shop is pretty large. 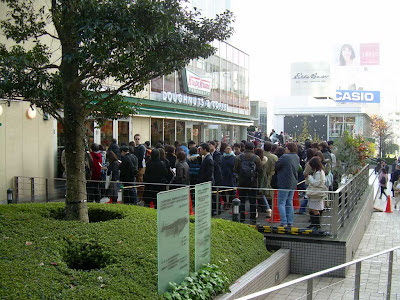 Here is the first line. My husband counted and said that there were about 200 people in line, counting this line and the second part of the line, as will be seen below. Considering that this is not something which is available for a limited time or is on sale to the first x number of people, it's rather impressive that people would bother to do this. When my husband asked how long it would take to clear the line and get in for donuts, he was told it would be 2 hours. Needless to say, he didn't get any. He's keen to get them, but not quite that keen.

My husband said that he felt that this line is exactly what the Krispy Kreme people wanted for their opening day to generate publicity. He felt the promotion (which I described in a previous post) was specifically designed to get this type of result. Apparently this too was successful, as he saw a man with a large video camera and a tripod, with an armband indicating that he worked for one of Tokyo's main TV stations. 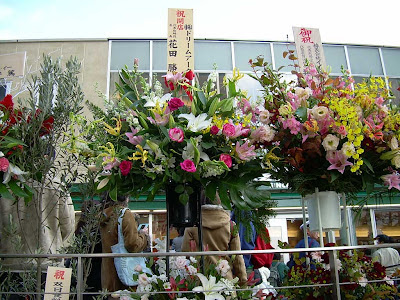 When a new shop or business opens in Japan, these types of flowers are displayed outside. A shop near our house actually cleans and prepares these sorts of things. 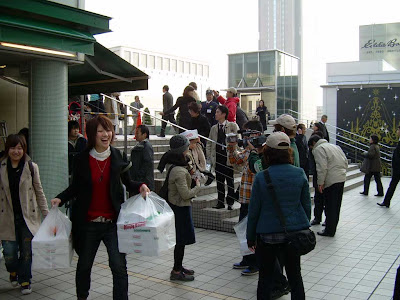 There's someone with a video camera shooting in the center and a very happy woman with a huge quantity of donuts on the left. I believe each of those boxes has a dozen donuts. I have no idea what anyone would do with 8 dozen donuts unless they were taking them back to the office with them. In fact, I wouldn't be surprised if some offices would give leave to office ladies to wait in line for something this frivilous. Office ladies in my former company would often run out for an hour or so for far less "momentous" events. 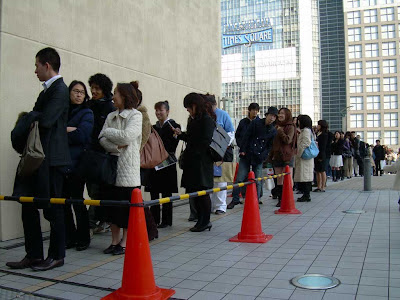 Here's the second line that snaked around the building. They're a pretty orderly bunch. One of my husband's students said that she believes Japanese people sometimes see a line and assume anything that people choose to wait in line for must be pretty good. She said she thinks some people don't even know all that much about what they're waiting for but just join in (if they have some free time). Even so, some Japanese at his office were equally mystified that such a long line would form for donuts. And finally, it's the end of the line. The sign that poor guy is holding says "end of the line". I can't imagine a much crappier job than having to stand around for hours holding a sign like that. My husband said that he was pretty prompt about moving the sign backwards when more people got in line, pushing the end further back.
Posted by Shari at 10:48 PM

Despite all the hype, we had a shop open and close in under a year and half. I drove past it every morning and the drive-thru line was always filled. Guess it was just busy in the morning time. Even though i went there several times (mostly to buy for the office since I passed it), I just wasn't really impressed with their donuts. Too sugar coated for me and I'm a guy who loves his donuts, most sugary snacks and the snacks with high-fructose corn syrup as the #1 ingredient.

I'm not much of a donut fan though my husband is. However, his nutritional concerns will keep him from frequent patronization despite his school's proximity to the shop.

I have to wonder if the U.S. version is sweeter than the Japanese one already because the raised glazed I sampled last week was no sweeter than a glazed old-fashioned from Mr. Donut.

I honestly don't hope they go out of business since I think competition is a good thing but I can't say I'd be broken-hearted if they did. Chances are that, after the hype dies down, I won't be sampling them more than once every few months at most.

Ha ha... brilliant! I am a huge Krispy Creme fan. Although I have heard that the doughnuts have some type of fat in them that the body cannot digest, which just sits in you for ever. Nice!

Great coverage of the Krispy Kreme phenomenon in Japan. I happened to walk past that shop on Dec 28 in Shinjuku in the evening and it was much the same sight. This is similar to Mister Donuts opening up in Taipei. Maybe it's a good marketing strategy - people have a lot of time on their hands at this time of the year - and not much other excitement.

Thanks for your comment, Gavin, and for the interesting information about Mr. Donut in Taipei. It makes me wonder how much is novelty and how much sincere love of the product. I guess time will tell. :-)

Thank you! Now I know where it is and will definitely be going today! I've been going to school here and this is the second semester so I'm seriously missing the Krispy Kreme. Thank again!

Hi, Steph and thanks for coming by! I hope you're doing well and enjoying Temple. My husband had a former coworker (who now, ironically, works with his brother) who got a Master's degree there.

Have fun at KK!